History of the Association 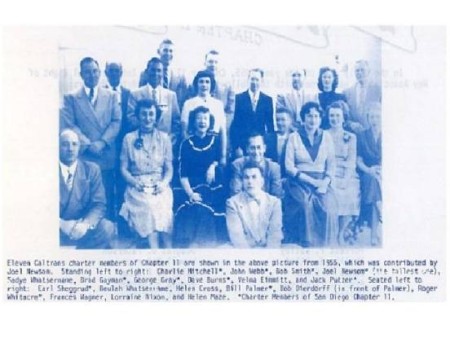 THE WAY IT WAS
By Joel Newsom, SR/WA

John Webb, Caltrans District R/W Agent, was the driving force behind formation of our San Diego Chapter. He set up the organizing committee, presided at meetings, and was elected chairman of the Club Affiliate and first president of our Chapter, by acclamation. His contribution was enormous, indeed, but John was himself driven by an ever stronger force: Frank Balfour, founder of the association and John's supervisor.

I was not privy to the discussions between those two individuals that led to Chapter formation. But I was very privy to a rapid series of assignments which fell unto me, as there was a great deal of work to be done to accomplish the mission. The Caltrans staff constituted a host of helpers, both volunteered and commandeered. Few agents escaped playing some role. At the very least, attendance at all Club Affiliate/Chapter functions was mandatory by all who desired to display 'team spirit' (i.e., aspired to advancement).

My work in those formative months led to a personal dilemma. The increasing demands on my time led my friend and supervisor, John Ritz, to counsel me rather sternly that my production must not fall off. John fervently believed the Almighty had put me on this earth solely for the purpose of closing deals for Caltrans. After he convinced me that my paltry 100± deals per year meant the difference between suc­cess or failure of the highway program, I pleaded mea culpa and re-doubled my efforts to successfully perform both functions. But it severely taxed my funambulist's skills.

A portentous event was the organizational meeting held in a down-town hotel. Attendance was sparse, despite a rumor of free drinks. Primarily as a result of John's strong leadership, out of the meeting came a decision to form a Club Affiliate of the Los Angeles Chapter, with chapterhood to follow. Number 11 was reserved as the future chapter designation, in as much as San Diego was in State Highway Dis­trict 11, as well as the 11th Naval District. Some months later our chapter installation banquet was held. Our mission was accomplished---San Diego had its own full-fledged chapter.

From today's vantage point, it is difficult to recall the anguished effort required to form our Chapter. At the time, I suspected I was taking part in something important, and now, a quarter century later, that suspicion has clearly been confirmed. On occasion, however, dur­ing that frantic time, I felt like the man who had just been tarred and feathered: "If it weren't for the honor of the thing, I'd just as soon have foregone the experience."

Although by no means an exclusive Caltrans' organization, for some years the Chapter was markedly tilted in that direction. Many key posts and offices were staffed by Caltrans people, and that organization was informally acknowledged as the backbone of the Chapter. Upon my return to San Diego in the early 70's, after a 13-year hegira elsewhere in the state, I was surprised to see the diminished role of Caltrans in the Chapter, and have often pondered the cause. Perhaps a reaction to the ‘friendly persuasion' tactics (at times bordering on coercion) of earlier years?  In any event, our Chapter's present balanced mix is a testimonial to its vigor and. broadened appeal.

Lest  there be any right of way practitioner among us, however,  who is not aware of his debt to the late John Webb and Frank Balfour, or to the organization which spawned those energetic individuals, for forming and sustaining our organization through its formative years, let him think again.

Our present-day lives and livelihood requires the ready movement of people, goods, natural resources, and the prompt exchange of information. Today's transportation and transmission networks both create and reflect an increasingly organized and sophisticated society. Development of these networks necessitates acquiring strips of land called rights of way, on which highways, railroads, pipelines, power lines, wireless transmission towers, urban renewal, parks, forestry, wildlife reserves, and so forth can be built and used. Thus, the amount of land devoted to right of way and public use, for whatever purpose, can be viewed as a direct reflection of the dynamic nature and constantly changing demands of society.

Right of way has a history of emerging democracy. With each advancement in modern technology has come the need for more public land and right of way, and simultaneously, the demand for new legal safeguards for the rights of the affected property owners. In turn, each new safeguard has demanded advancements in the methodology and technology of the land acquisition and management profession, and new approaches to negotiation, valuation, management and disposal of real property or property rights.

WHO IS THE INTERNATIONAL RIGHT OF WAY ASSOCIATION?

Since its inception as a not-for-profit association in1934, the IRWA has united the efforts of its members toward individual development, improved service to employers and the public, and advancement in the body of knowledge related to the professional tasks of its members.

The IRWA is a single corporation with approximately 100 entities that manage and deliver the Association's quality services. It is the only professional association that is the pre-eminent source of right of way educational and professional services worldwide. The IRWA comprises a dynamic global community of more than 10,000 dedicated right of way professionals. Members receive cutting-edge solutions to industry challenges through specialized educational courses and seminars, programs of professional development, as well as thought-provoking forums for the exchange and advancement of ideas.

The continued success of the IRWA is a result of its quality services and programs, kind and supportive staff, dedicated volunteer leadership and its commitment to the advancement of right of way work.

Want to Become a Member?

For more information, use our contact form or download our registration form directly. We look forward to hearing from you!

Check out pictures of our latest events right here.